All four screenings of Prince of Swine were sold out at Laemmle Sunset 5 yesterday.

Prince of Swine is a wild and revolutionary new comedy, a metaphor for the state of the country, and a rowdy send up of everything from the new feminism to Wall Street to the American religion of celebrity.

“Toma, who stars, wrote, directed and produced Prince of Swine, has a good film on his hands. He makes excellent use of Los Angeles as his backdrop, filming surprisingly stylized and haunting scenes. Shots of Hollywood Boulevard haven’t looked this cool since Pretty Woman. Toma easily captures the vibe of what it’s like to be a girl in this town, especially a girl who wants to be famous, by any means necessary.

All in all, Prince of Swine is a well-made satire that’s easily enjoyed, provided you’re not expecting Citizen Kane.” Ebony March. Campus Circle. 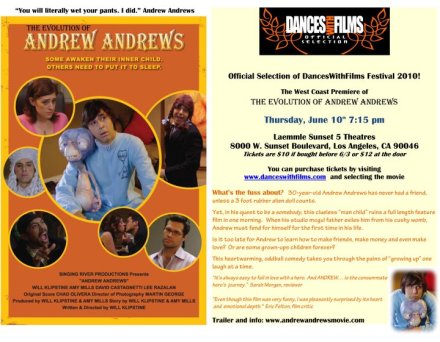 Hollywood based Ginger Media & Entertainment specializes in promoting independent film and art through social media marketing and PR. Ginger Liu has one of the largest social networks in the business and is a film and media graduate of the University of Westminster in London. She is also the Social Media Marketing Director of the London Photographic Association, LPA Moving Pictures and PZI Jeans.

The Evolution of Andrew Andrews

How To Make Love To A Woman

Error: Twitter did not respond. Please wait a few minutes and refresh this page.